Originally in the West Riding of Yorkshire, the village Waddington was called so because of the Saxon leader Wada, who was the leader in the Battle of Lango against King of Northumbria in the year 798.

The village has gained the title of “Best kept village” many times due to its tidiness. In the heart of the village there are some radiant Coronation Gardens. The ancient church of St. Mary’s has a tower dating back to the 1500’s, whilst the main part of the church was mostly restored in 1901. The village Almshouses is also of historic value, as it dates back to the 1700’s.

In Waddington there are also some local points of interest. There is a bowling green, a café and a playing field on which both cricket and football are played. Within the village there are three popular pubs, the Lower Buck Inn, the Higher Buck and the Waddington Arms. One mile up the fell towards Newton is the Moorcock Hotel & Restaurant which has now closed, and at one stage it looked to have been abandoned during mid-service.  It is currently being converted into houses (April 2019).

Every year on May Bank Holiday, the village’s scarecrow festival takes place, with May Day being the highlight of the festival. 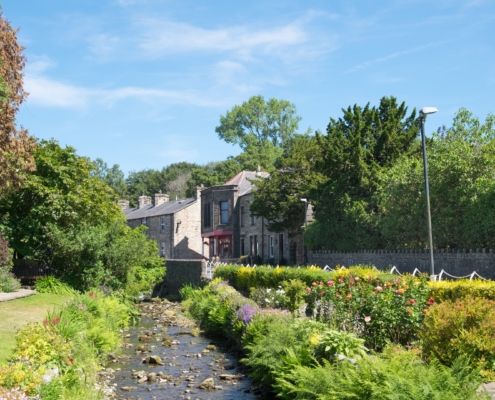