The tiny village of Quernmore is located approximately three miles from Lancaster in the valley of the River Conder, consisting mainly of farm houses and several private residencies.  The village and surrounding area was once dedicated as a Royal Forest and is set amongst the beautiful countryside of the Forest of Bowland AONB.

The history of the area dates back to the Romans, when in 1970 the first Roman pottery kiln was discovered with several more being unearthed at a later date.  The eastern side of the valley was once mined for millstone grit which was used to form stone tools for grinding purposes as well as also being mined for coal and for charcoal production.  Whilst walking in the valley you will have the opportunity to discover two surviving watermills, one located at Condor Mill and the other one heading towards Littledale.

The river Conder flows around Quernmore in a south westerly direction through the wide valley which was created by glacial action.  The source of the river can be found at Conder Head on Black Fell near to Littledale, it is a spring running through Cragg Wood then eventually flowing into the Lune Estuary.

Quernmore has an Anglican parish church (St. Peter’s) which is recorded as a designated Grade 11 listed building, situated around a mile to the north of the village.  The church dates to 1860 and was designed in the architectural style of the thirteenth century and built on the site of a chapel, it has a tower and an octagonal stair turret rising higher than the church’s tower.  There is also a Methodist chapel serving the community which is a much smaller structure than St. Peter’s church and also worth taking a look at.

Quernmore’s only public house (Dog and Partridge) served the locals during  the 1800’s and ceased trading in 1900.  The building then became the village shop and post office but sadly that also closed in 2008 leaving no similar amenities in the village.  There is a bus service connecting the village to other towns and villages although some of the journey times can be quite lengthy!

Whilst exploring the area it is worth seeking out Quernmore Park Hall which is a stunning Georgian country house standing in a twenty acre estate in the beautiful Lune Valley and is a Grade 11 listed building.  In the early 1600s the estate was sold to Roger Downes of Wardley by the Crown, then passing through the Clifford family until 1794 when it was sold to Charles Gibson of Preston.  This magnificent country house boasts a Chapel, Victorian kitchen, Bakery, extensive cellars and much more, along with acres of stunning parkland and gardens.  Two years ago it was listed for sale for £2.5m along with the Postern Gate Lodge for £250,000 and the Gardener’s Cottage and Walled Garden for £500,000.

There are many walking and cycling routes in and around the village including Clougha Pike and Grit Fell to Jubilee Tower.  Ward’s Stone, Bowland’s highest fell can also be climbed from the village.  Near to Brow Top (at the Quernmore crossroads)  you can see a Ordnance Survey Plug Bolt marking a point at 102.153m above mean sea level.  At Quernmore Brow there is a pretty Grade 11 listed cottage, Clougha Cottage – Quernmore Brow, dating from 1827. 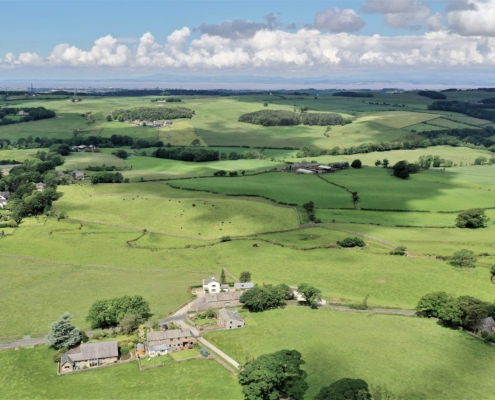