Lancaster is the county town of Lancashire and the most northerly city in Lancashire.  It was first recorded in the Domesday Book in 1086 as Loncastre, due to being on the River Lune “Lon” and “castre” for “fort” referring to the site where a Roman Fort once stood.  Roman coins were found suggesting that one of the many Roman forts built in the area of Lancaster Castle was around the end of the first century and possibly as early as 70AD.  Just behind Lancaster Priory are the remains of a Roman bath house dating to around 71AD.

On the site of Lancaster Priory on Castle Hill a monastery was discovered, with a magnificent medieval interior.  In 1807 an Anglo-Saxon runic cross (c800s) was found in the churchyard at the Priory and is displayed at the British Museum with a replica in the priory church amongst many other artefacts including Viking ornaments and remains of Dark Age origin.  There is a gift shop and coffee shop providing light refreshments.

The  medieval Lancaster Castle and Priory Church sit on a hilltop with views of the River Lune and was first built in the 13th century, with later additions to the building made during the reign of Elizabeth 1.  The 1612 Pendle Witch Trials were held at the court based in castle and reputedly the court sentenced more people to be hanged than anywhere else in the country (apart from London) and was known as the “hanging town”.  It later became a prison and the 19th century cells can now be visited by tourists, but are not in use anymore!

Many of the buildings in the city centre and along the quay date from the 1800s and were built for the busy port, although this was short lived when the river began to silt up, with nearby Heysham becoming the main port.

With over forty miles of lock-free canal winding its way through the surrounding countryside and meandering towpaths along the canal and quay, you can take a gentle stroll and admire the Georgian buildings lining the banks of the River Lune.  There are secret paths and follies to be discovered in nearby  Williamson Park and an Edwardian butterfly house.  The magnificent Georgian colonnaded customs house, once the destination for arriving tall ships carrying tea, coffee, spices and sugar is now a maritime museum.

A short drive away is Glasson Dock where there is a tarmac pathway and cycleway following the River Lune to the Forest of Bowland and the Crook O’Lune.  There are many walking and cycling routes in and around Lancaster, with around fifty miles of traffic-free bliss!  The classic seaside town of Morecombe is not far away and you can walk from Lancaster to Morecombe promenade  (three miles away) taking in stunning views of the Lakeland Fells, the sandy coastline and the beautiful 1930s Art Deco Midland Hotel which has been recently renovated and  is back to its former glory.

Allow yourself plenty of time to fully explore this fascinating vibrant city with its independent galleries, quirky shops and renowned Penny Street shops.  Spend time relaxing in one of the many coffee shops, cafes, restaurants and pubs where you can sample anything from delicious home-made food and cakes to delicious locally-brewed real ale.

There are many places for tourists to stay over including the Holiday Inn, Royal Kings Arms Hotel, Lowfield B&B and a short distance away Guest Rooms are available at Lancaster University.   The University is set in 250 acres of parkland and visitors can enjoy the beautiful surrounding scenery as well as the Forest of Bowland (AONB) and the Lake District National Park being within easy reach. 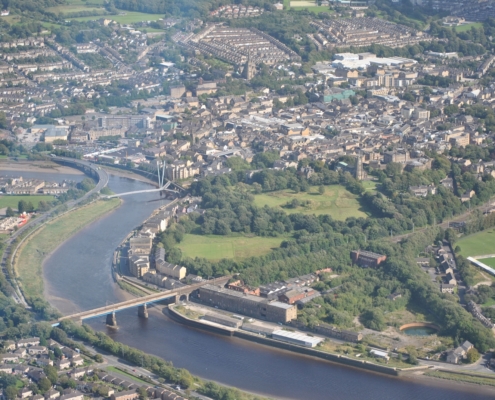