Gisburn is a small thriving linear village located in Lancashire’s Ribble Valley.  Once the centre of a large ancient parish the village became a civil parish in 1866.  The Church of St Mary the Virgin is a Grade 11 listed building and is thought to date back to the early 12th century, with the pillars at the front of the church dating to a similar period and the door around the 13th century.  Several years ago a rare Bible (printed in 1611) was discovered inside the church.  There is evidence that part of the church’s beautiful archway came from Sawley Abbey when the Abbey was destroyed. The church is well worth visiting and has the most stunning north and south facing Norman stained glass windows.

Gisburn dates back many centuries with an old Roman road from Ribchester to Ilkley passing the south side of the village with remains of a 4th century farmstead near to the Brogden and Bracewell boundary.  North of the village is a Ringwork or earthen castle of Norman origin known locally as Cromwell’s Basin.  Oliver Cromwell stayed in Gisburn with his troopers during the uprisings and an extract from a letter written by him at the time of the Battle of Preston in 1648 states… ‘Hearing the enemy had advanced into Lancs we marched on the 15th August to Gisburne…’.  The battle was largely fought at Walton-le-Dale near Preston and resulted in a victory for Oliver Cromwell over the Royalists and Scots.

The village is well known for its busy market days with origins linked to 1260 when a Charter was granted by Henry III to the Abbot and Monks of Sawley Abbey for a market to be held every Monday.  Up until early 1900 they were held on the main street but later relocated to another site next to the old railway station.  Sadly, the railway station was closed in the early 60s.

The village is surrounded by dramatic hills with unspoilt views of the landscape.  To the west is Bowland Forest (AONB) and Pendle Hill is to the south.  Between the village and the River Ribble is one hundred and sixty eight acres of park land, which during the 18th century was frequented by roaming wild white cattle and deer.  The former deer park and Grade 1 listed country house was constructed in the early 1700s and is now a private hospital – Gisburne Park Hospital, equestrian centre and Ribblesdale holiday park with luxury lodges and cosy cottages.

The scenery around Gisburn is breathtaking, with challenging hills and dense forest for the more serious walkers.  There are trails to explore whether on foot or mountain bikes and walking through the woods of Gisburn Forest takes you to a very peaceful place, being at one with nature, breathing in the fresh air and spotting the wildlife.

On the main street there is the 18th century coaching inn, the White Bull which is a pub, restaurant and B&B and there is also an Italian restaurant, La Locanda.  There are also cafes and a deli close by and accommodation for overnight or longer stays.  For walkers and explorers and any visitors to Gisburn, just over a mile away is the stunning ivy-clad Stirk House Hotel.  Stirk House is a 17th century manor house with over twenty acres of beautiful landscaped gardens, nature trails and woodlands. If you are staying longer and making the most of exploring the area, the hotel has thirty three luxurious bedrooms and suites as well as the award winning Prime Restaurant sourcing local fresh seasonal food and foraged ingredients from the their land (when available). 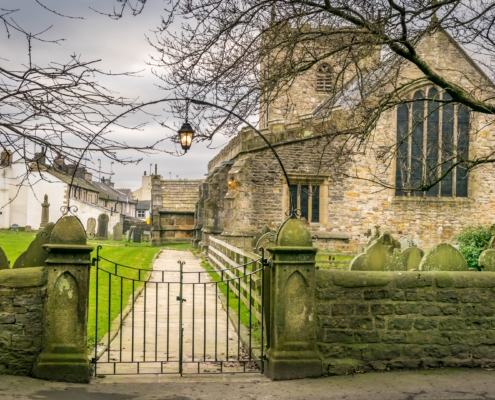