Tucked away at the foot of Pendle Hill is the “most beautiful” village in Lancashire, as it is regularly quoted as being.  The quiet and unspoilt village of Downham, with time passing it by, is close to the bustling market town of Clitheroe and is situated in the Forest of Bowland (Area of Outstanding Natural Beauty).  There is a babbling brook running by the village green which is a magnet for ducks, birds and wildlife and there are benches so you can sit and enjoy the tranquillity.  The unrivalled beauty of Downham has made it a popular location for filming period dramas, making filming much easier as there are no signs, visible aerials, satellite dishes or overhead electricity cables.

With unrivalled views across the countryside, this thriving village has much to offer residents and visitors alike.  There is a lovely tea room, a camping barn for overnight stays, a village green and a free car park (if you can find it!) and the Downham Ice Cream shop selling delicious ice cream, drinks, confectionary and desserts.  Although there are no signposts in the village to direct you (not even a Downham village sign), there is a visitors information centre and public conveniences (which is a converted cow shed!).  The historic Grade 11 listed country pub and accommodation, the Assheton Arms, has won many accolades including Lancashire Tourism Awards Pub of the Year and Lancashire Life Dining Pub of the Year.

Since 1558 responsibility for the village and estate has been held by the Assheton family, the present incumbent being Ralph Assheton.  Built on remains dating back to the 16th century is Downham Hall, a Grade 11 listed building, which was built in the early 1800s and has been owned by the Assheton family since 1558.  At the entrance to Downham Hall is a large stone which is allegedly the final resting place of two Roman soldiers.  There is evidence that settlers came to the area during the eighth or ninth century and although there is no mention in the Domesday records, reference to “Aufray the Saxon” suggests a community settled at the time of the Norman Conquest.  The Roman road, well used by travellers in the Ribble Valley, passes alongside the village green linking with an even older route passing the south side of the village.  There are many stone walled slate roofed cottages dotted around the village, once the home of handloom weavers from the nearby mill.

Situated at the top of the main street is St Leonard’s Church, a Grade 11 listed building with a magnificent 15th century tower.  The Church was rebuilt in the early 1900s and during the rebuilding of the Church evidence of Norman or Anglo Saxon foundations were unearthed.  Three of the four Church bells are thought to have originally come from Sawley or Whalley Abbey, with markings attributed to John Walgrave (c1408).    In the churchyard is an octagonal based sandstone sundial dated 1808.

There are lovely walks in and around Downham and by turning right at the Church the road takes you to the bustling village of Twiston a mile away.  One of the most spectacular views from village is Pendle Hill, and for those with walking in mind, it is a lovely walk with clearly defined paths and is just over two and a half miles.  Sawley Abbey is around one and a half miles from the Downham and Clitheroe Castle is only three miles away. 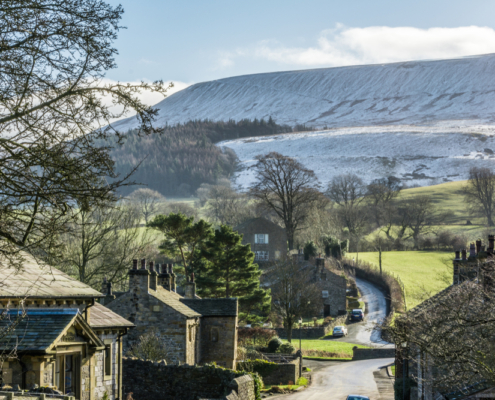